You must login to ask question.

Olympia is a 1938 German documentary sports film written, directed and produced by Leni Riefenstahl, documenting the 1936 Summer Olympics, held in the Olympic Stadium in Berlin, Germany. The film was released in two parts: Olympia 1. 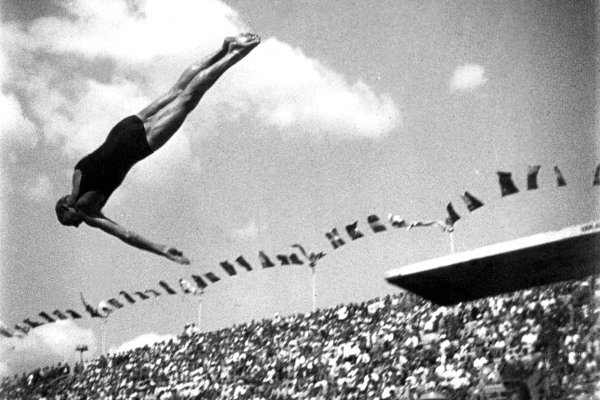 Teil — Fest der Völker (Festival of Nations) and Olympia 2. Teil — Fest der Schönheit (Festival of Beauty). It was the first documentary feature film of the Olympic Games ever made. Many advanced motion picture techniques, which later became industry standards but which were groundbreaking at the time, were employed —including unusual camera angles, smash cuts, extreme close-ups and placing tracking shot rails within the bleachers.

The techniques employed are almost universally admired, but the film is controversial due to its political context. Nevertheless, the film appears on many lists of the greatest films of all time, including Time magazine’s “All-Time 100 Movies.”

Olympia set the precedent for future films documenting and glorifying the Olympic Games, particularly the Summer Games. The 1936 Summer Olympics torch relay was devised by the German sports official Dr. Carl Diem for these Olympic Games in Berlin. Riefenstahl later staged the torch relay for this film, with competitive events of the Games.

Amateur photography was used to supplement that of the professionals along race courses. Perhaps the greatest innovation that came out of Olympia was the use of the underwater camera. The camera would follow divers through the air, and as soon as they hit the water, the cameraman would dive down with them, all while changing focus and aperture.

Olympia was made in three versions: German, French and English. There are slight differences between each version, extending to which portions were included and their sequence within the entire film. The French version is known by the alternate title Les Dieux du Stade (Gods of the Stadium).

It appeared to be Riefenstahl’s habit to re-edit the film upon re-release, so that there are multiple versions of each language version of the film. For example, as originally released, the famous diving sequence (the penultimate sequence of the entire film) ran about four minutes. Riefenstahl subsequently reduced it by about 50 seconds. (The entire sequence could be seen in prints of the film circulated by the collector Raymond Rohauer.)[citation needed]

The film had an immensely strong reaction in Germany and was received with acclaim and accolades around the world. In 1960, Riefenstahl’s peers voted Olympia one of the 10 best films of all time. The Daily Telegraph recognised the film as “even more technically dazzling” than Triumph of the Will.[4] The Times described the film as “visually ravishing … A number of sequences in the supposedly documentary Olympia, notably that devoted to the high-diving competition, become less and less concerned with record and more and more abstract: as some of the divers hit the water, the visual interest of patterns of movement takes over.”

American film critic Richard Corliss observed in Time that “the matter of Riefenstahl ‘the Nazi director’ is worth raising so it can be dismissed. [I]n the hallucinatory documentary Triumph of the Will… [she] painted Adolf Hitler as a Wagnerian deity… But that was in 1934–35. In [Olympia] Riefenstahl gave the same heroic treatment to Jesse Owens…”

The film won a number of prestigious film awards but fell from grace, particularly in the United States when, in November 1938, the world learned of Kristallnacht, an especially large pogrom against the Jews of Germany. Riefenstahl was touring the U.S. to promote the film at that time and was immediately asked to leave the country.

There had been few screenings of Olympia in English-speaking countries upon its original release; the film was not shown in the United States until 1940, and was then re-released in 1948 under the title Kings of the Olympics in a truncated version acquired from Germany by the U.S.

Office of Alien Property Custodian and severely edited without Riefenstahl’s involvement. In 1955 Riefenstahl agreed to remove three minutes of Hitler footage for screening at the Museum of Modern Art in New York City. The same version was also screened on West German television and in cinemas around the world.

In the 2016 biographical film about Jesse Owens, Race, the filming at the Olympic Games is depicted with Riefenstahl constantly quarreling with Goebbels about her artistic decisions, especially over filming Jesse Owens who is proving a politically embarrassing refutation of Nazi Germany’s claims about Aryan athletic supremacy.

Neue Deutsche Härte band Rammstein released a cover of Depeche Mode’s song “Stripped” in 1998. The song’s music video is made from footage from Olympia.